During the past several years, we have been making a concerted effort to record the great stories of the Paul & Afton Felt Family. These stories are like our own book of scriptures. Many of the stories are collected in these volumes of the “HeartFelt Forum”, our family newsletter.

Added to this, we have an extraordinary treasure that I call, “The White Plates”.

Not many months ago, Dad took up the task of compiling his personal history with great energy. To this task, he devoted himself single-mindedly and expended great energy, both spiritual and physical, hour-after-hour, day-after-day. He sought and received a Priesthood Blessing to aide him in the undertaking and he prayed over the effort continuously. Throughout the exercise, he enjoyed great mental acuity and would often marvel at the detail of recall that came to him as memories and events long forgotten were suddenly fresh in his mind.

With Mom reading and rereading every page and with the tireless support of an assistant who typed and organized the materials, this volume was completed only several weeks ago. With the aide of that great teacher, Hindsight, there is now so much more to understand and appreciate about how Dad was prompted and sustained through this exercise. 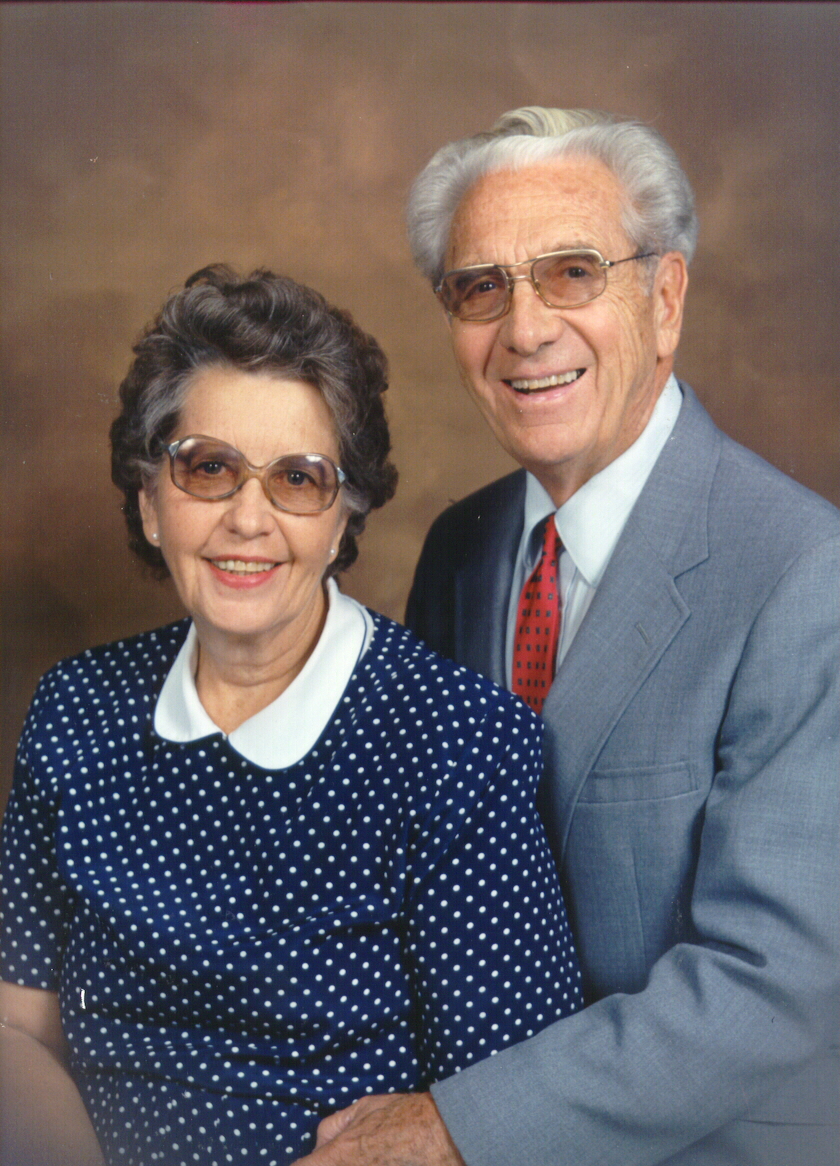 The stories preserved by our family newsletter and this history are a great treasure to our family. They mean more to us than silver and gold. We never tire of hearing the stories and by retelling them to our children we know that we are passing along the valuable traditions that sustain and bind our family together.

For example, how many times have we revealed in the story of the bewildered Brigham Young University student body president Paul Felt who, scratching his head at the gates of the Utah State Penitentiary, was certain that young Afton Harris had played him a cruel prank? You see, in agreeing to spend the evening out with Paul and in handing him her address, Afton forgot to mention that her father was the warden of the State prison. We have fixed in our minds, just as if we were there watching and laughing, the site of the shock on Dad’s face when after he finally asked the guard for help was told, “O! We’ve been expecting you!” as the gates are being flung open to receive him.

How we love to retell the story of young Navy Ensign Felt visiting Salt Lake on leave from Officer Training School. All spiffed up in his officer’s uniform, he picked Afton up from her nurse’s training at Holy Cross Hospital and together they went on a walk through Memory Grove. A dashing, nostalgic picture forms in our minds as we see the two of them together—the Naval officer on a stroll with a student nurse in her starched cap and cape. Then the whole scene takes such a delightful twist as we learn that Nurse Harris, in dodging Officer Felt’s bold advance as he leaned over to kiss her, knocked his hat into the swirling waters of City Creek! He had no choice but to jump in, jacket, shoes and all, and go after his hat. I wish that we could report that he was able to retrieve the hat but alas, all he had was a damaged ego and clothes soaked to the waist!

There’s a poignant honesty to so many of his stories. Mom will scold me if I relate too many of them but how we laugh in retelling of the time when as a teenager he siphoned gas from his Bishop’s car only to be discovered when he, together with the Bishop’s son, started burping up gas fumes while they sat to bless the sacrament that same Sunday afternoon.

In considering the years that Dad spent as the President of the Southwest [American] Indian Mission and the thirteen years he spent in the Mission Presidency of the Missionary Training Center, there is some pleasure and understanding that comes from reading the story of Dad’s service as a young missionary to the Central States. The deep compassion and understanding that countless missionaries recognized in Dad as they sat in counsel with him surely some connection to the experience young Elder Felt had of crawling back into his dorm room in the Salt Lake Mission Home after a rendezvous with a friend only to find the Mission President awaiting his return.

With that retelling of stories from his earliest years, let me jump to a very recent, very important story that is also recorded in our family history.

Just a few years ago, as we concluded our annual Family Reunion, Mom became very ill and each day brought only a worsening of her condition. The medical attention that she was receiving seemed inconclusive and as her physical strength deteriorated, Dad grew ever more alarmed. It seemed that she was becoming more dispirited and listless by the day and in her weakened condition Dad feared that she was losing the strength of will to recover. The thought of losing her was more than he could bear and his dependence on Mom’s companionship, a phenomenon that is well known to all of us, was never before so poignantly illustrated.

It was natural for Dad to turn to the healing power of the Priesthood. As we joined him in the administration there unfolded to our eyes an extraordinary view of a sacred dimension of Dad’s character and personality that, by its very nature, is necessarily tended away and guarded carefully from any public display. It is the man he is when he bows in secret worship before God.

In calling upon the power of the Priesthood, he did not trifle with words nor did he pause to offer expressions of encouragement to Mom as we were so accustomed to hearing from the many blessing we had all received under his hands. Rather he set directly upon his task and approached our Heavenly Father in startling boldness, calling upon the Heavens to take note of his labors in building up the Kingdom, in struggling for righteousness, in serving in the Temples and the mission fields. He enumerated the pieces of evidence of his Heaven-focused desires, recalling that he had worn his life in the service of the Kingdom.

Then he very deliberately and forthrightly said, “Now Father, I cannot live without the sustaining influence of my dear companion. Let thy mercy be upon me and honor my petition: Restore Afton’s health. Bring about her full recovery.” I recalled the words of the Old Testament prophet, Hezekiah, who implored God in a similar fashion saying,

I beseech thee, O Lord, remember now how I have walked before thee in truth and with a perfect heart, and have done that which is good in they sight. 2 Kings 20:2

Though we stood just next to him, we were, in fact, a great distance off and we could only strain to comprehend this parting of the veil.

On this occasion, we beheld the heart and soul of one who, having subjected himself over the span of decades to a steady process of purification and sanctification, could present himself with reverential boldness to his Heavenly Father. The capacity had surely been hard won through a carefully nurtured process of secret prayers, faithful fasting and patient searching, repenting and correcting through diligent to the whispering instructions of the Spirit.

A thousand essays could not teach the volumes that were laid open to us regarding the boldness and reverential familiarity that the righteous may properly employ in addressing God the Father. A wondrous lesson to behold in any forum, an indescribable advantage to witness manifest in one’s father!

This is the man we honor today. This sacred achievement that a loving God allowed us to behold is a precious, precious memory. It is the sum total of his life.

I have jumped from the earliest part of Dad’s history all the way to point of great spiritual and emotional maturity. I have done so on purpose for collectively, all of you here today fill in the important parts that go in between. I only note that Paul Felt never aspired to write books or lead organizations and he never sought status or prestige. Instead, he revealed in the great books that his friends and colleagues wrote and he marveled in the leadership that you offered in the community and in the Church. Indeed, his circle of acquaintances and the men and women who he loved and who loved him truly are the pillars of our great community. Your books and teaching fill his bookshelves and the markings of his pen fill the pages between the covers. How he loved you! How often he made mention of your names.

Because of his acquaintance with you and owing to the influence for good that the community he belonged to had in so many places around the world, the sons and daughters of Paul Felt could not go anywhere in this world without being told by someone somewhere that they knew and loved our father. For this, we thank you with all our hears!

Most of all, he loved the teachings of the Brethren and the Scriptures. His words, repeated over and over through his lifetime, echo in our ears:

We have been instructed by Dad that there should be “no heartache and no tears” but this we can not do. How we enjoyed the companionship of our father. We were comforted by being in his presence. We benefited from the sound and lasting quality of his spiritual strength. We miss our father sorely and our hearts ache.

Let his life stand as an inspiration to us all.