Seeburg?  Nope – not a ship

We enjoyed having a pool table in the family room for several years and this attracted many friends from around the neighborhood.  The room also boasted a Seeburg record player that the family had acquired some years earlier at great expense. 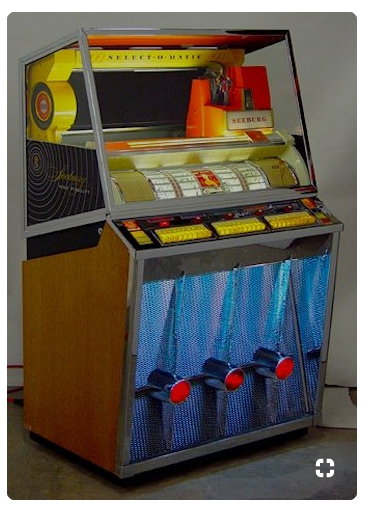 The long rectangular body of the player rested horizontally on four legs about three feet off the ground.  Fifty 45 rpm records could be inserted into equally spaced slots across the front, each having a small switch that could be placed in one of four positions designating that side A or B or both be played or that the record be skipped.  Behind the row of records, the player would glide along a track until it came upon an order to play, whereupon it would stop and a mechanized arm would lift the record out to be played.  We would line the slots with our favorite records and enjoy the music while playing pool or engaging in any number of other activities downstairs.  When Mom and Dad purchased the Seeburg it was one of the most expensive pieces of furniture they owned and represented a sizeable portion of their annual income.  Music was important to Dad and it was a luxury that they always allowed themselves.

We wonder whether this exposure to the Seeburg Addiction is the reason brother Paul Jr is still behind the microphone at a FM radio station in Hobart, Tasman at his ripe old age of 74.

Perhaps a local chapter of Seeburg Anonymous might help?