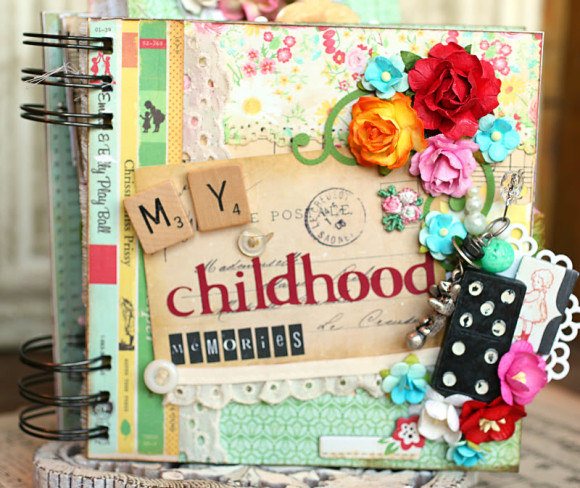 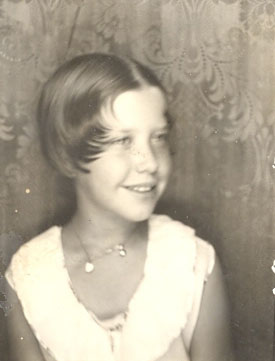 As I think back and remember my childhood many memories flood my mind today I will attempt to share with you one or two.

I have mentioned about another Aunt Alice my father’s Sister, who would come to the house with her husband Uncle Barlow.

Some other memories of her her compassionate nature.  When LaVerne’s first son Doug was born the doctor who was delivering her had run from a patient who had tried to have an abortion and had blood poisoning and he had not scrubbed properly and infected LaVerne.

She was in bed for six months after his birth with an infection called Milk Leg and carried the effects of this throughout her life. Aunt Alice who had studied to be a nurse came and lived with us and nursed LaVerne for these many months.  LaVerne and Jean were renting the Apt #2  In the Harris house and mother was so glad to have her close, for she told of the many nights she would lay by LaVerne and just hold her tight because of the fever and the chills she was having. (I will include the talk I gave at LaVerne’s services  it will give you a few thoughts I have on Laverne.)

In later years this Aunt Alice lived in American Fork, on one visit that mother and I made there I took Tammy and Tom and Kathleen with us.  We were all visiting in the living room and all of a sudden the vacuum started up in another room in the house.

This was a shock to Aunt Alice for she was the only one at home she hurried to find the cause of the noise, on checking the house she found Tom, not quite two. pushing her Kirby vac in her bedroom.

just like ours and he knew how to turn it on and was helping. 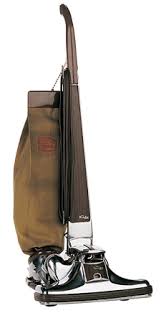 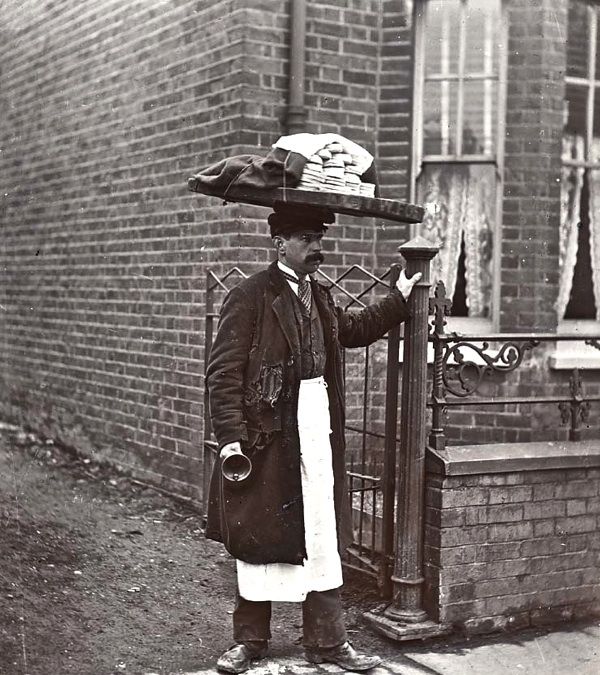 Aunt Alice was always a  hard worker and her younger brother my uncle Lee, was out of work, so she started to bake bread and have him take it to stores to sell.   The business grew and she converted her into a bakery and bought big ovens and mixers and they were now in a thriving business.

Fresh bread was delivered every day, some days when Lee did the route he would have a few loafs to pick up that had not sold, their quandary was what do do with this bread. They asked us if we would like to buy it at 10 cents a loaf.  So I didn’t have to bake bread and we had a wonderful supply for the few years that she was able to do this hard work.   They were always so appreciative of our buying this bread and we loved it.

She got so the work was too much for her and Lee got work at Nortons Groc so she retired and I went back to baking our bread.

She went to live with Lee and Leah and was with them until her death.

The City Library was us and each week we would go and get a new book to read.  It is fun to see how the movies that have been made of some of these books.  Anne Of Greem Gables, The Wizard of Oz,  Secret Garden and others.

One of the girls in the neighborhood would read three books a week, but I remember just taking one home and enjoying it and on Sat afternoon.

If we had our work done we could go to the library and listen to a storytelling hour. 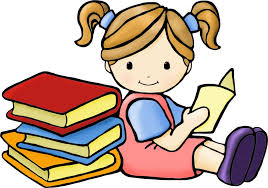 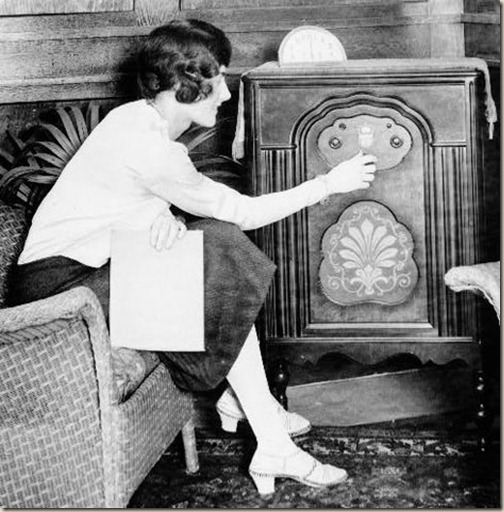 Radio didn’t come out until I was in Grade school and we got a radio when My father was very ill with Rocky Mountain Spotted fever.

It was a major purchase and were loved to it.  ( I have written about this in the History written earlier.)

When I was between the 5th and 6th grades one of the things that out in my memory is the hours that my friends and I spent sitting on a our lawn sewing doll .  The popular doll of my a Shirly Temple doll.  She was a popular movie star and wanted her in a doll.  My parents could not afford the real thing so I got a beautiful look alike.  We would get the of cloth from our mothers and sisters and sit together and sew clothes for our dolls.  I was wondering for in pooling our fabrics we could have so many more outfits for them.

I remember on time being disappointed the way the pants I had spent so long making fit her.   When I showed it to mother she sat down and showed me how the crotch was cut and formed.  I was the most popular sewer then as I could now teach my friends the art of making doll pants.

When we were moving to Salt Lake some 2 or 3 years later and having kept this doll and all of her clothes that I thought were so beautiful,  we were visited by my cousin, whose little daughter looked with envy at my doll.

So I put everything in a box and a very happy little girl went home with a Shirley Temple doll in her arms. 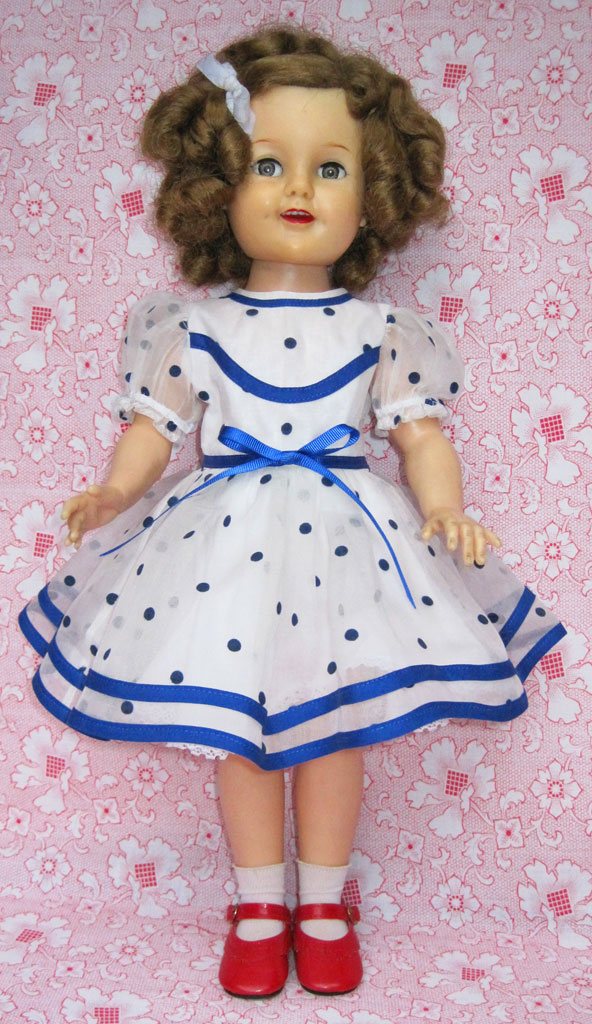 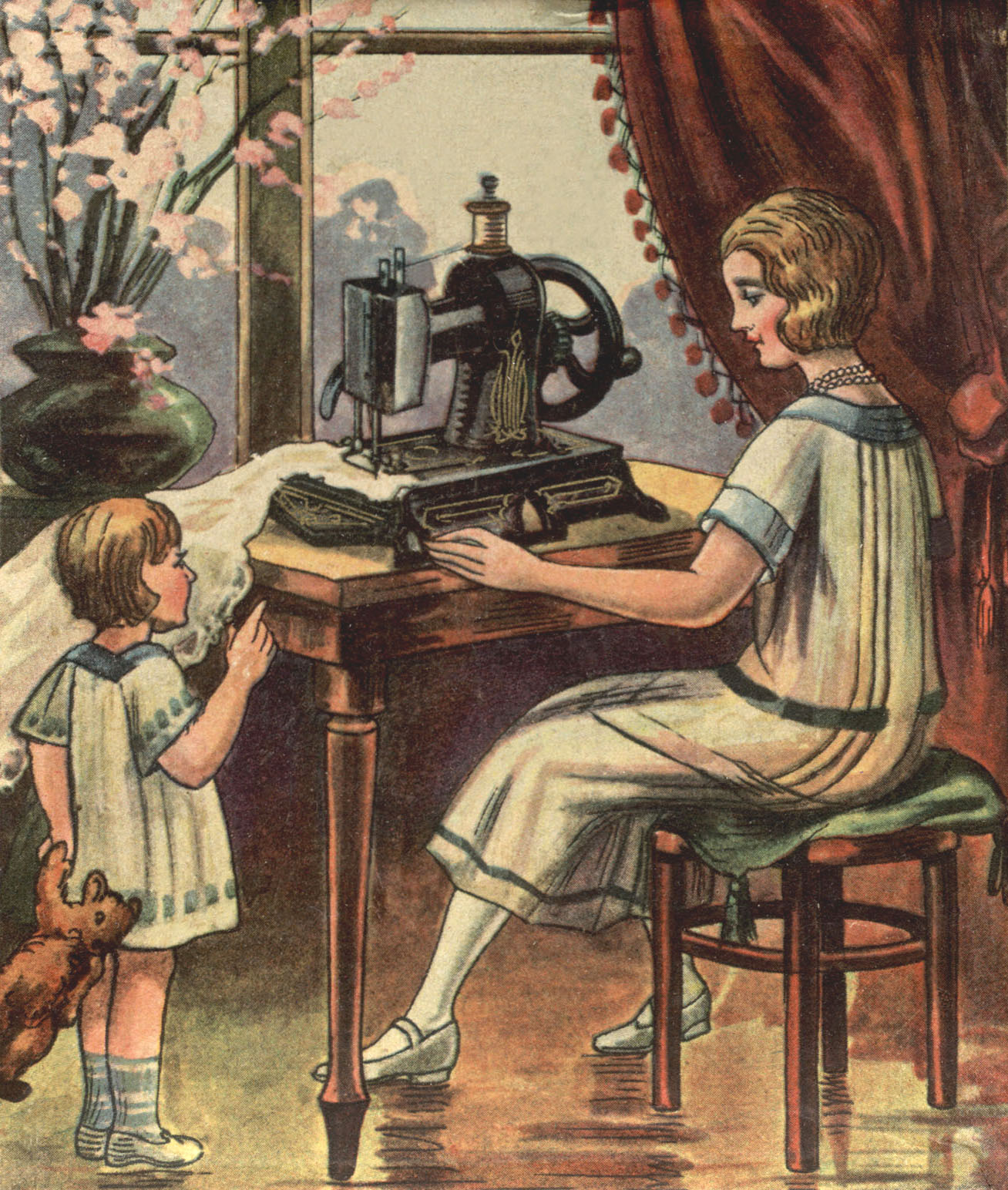 Sewing has always been important in my life, I took classes in Jr. High more in High School.

One particular memory of a sewing class was at Irving Jr. High School in Sugarhouse.  One of the first dresses we made was a simple type sheath dress.  I had learned so much watching my older sisters sew and set the sleeves in before I sewed up the side seams.  When the teacher saw what I was doing she scolded me and told me that that was the factory method of sewing and that I should really sew up the side seams first, she was sure that the dress wouldn’t fit right.

When I turned it in for a grade she must have forgotten all of that for to my surprise I an A!    I took more classes at East High School and made a coat and made my graduation dress and was honored with others in the class to be chosen to model my dress for a picture in the paper.

Sewing has made it possible to dress our children and to spend many hours with our daughters and sons as they have learned to make their own clothes.  One of Marilynn’s friends was moaning the fact that she didn’t have many clothes and wondered how Marilynn could afford so many, she would not believe that all of hers were homemade.  They came to Marilynn’s closet and there was not a ready-made item.   Marilynn does not sew now but she used to.

One memory of Yvonne when she had a paycheck she went into town to get a ready made dress, quite proud and sure of her self.  She shopped the afternoon and returned with material and a pattern.   Ron became an able master of the machine.  The MIA was doing dances for a special dance at intermission when we lived in Holbrook.  The white pants they wanted everyone to wear were expensive and he saw that I had a white knit material and purchased a pattern and made his pants with a little help from me.   They turned out so nice he purchased material for and sewed another pair of pants.

Kathleen, Jessie, and Tammy would shop for material and would sew and share the clothes, it enlarged their wardrobe and gave them many more choices.  They laugh now for often Kathleen would buy the material if they would sew it up, for now, it is Kathleen who does the sewing.  She has made her children beautiful outfits and can sew anything for the children or her home.

Jessie would often sew a dress to wear on a date that night.   They all took sewing in school and could teach me many new shortcuts and ideas.  Jessie made her dresses for the special dances and sewed her Wedding Dress.  She saw a  picture of the dress she wanted to make and the clerk in the store was so helpful in helping her chose the materials she would need.  The dress is beautiful and Katheleen and Tammy have each worn it to to be married so it has become a family heirloom.

Now with the price of materials and the price you can purchase a dress or pants, it is almost cheaper to buy the clothing.  So the girls are not doing a lot of sewing for their families. 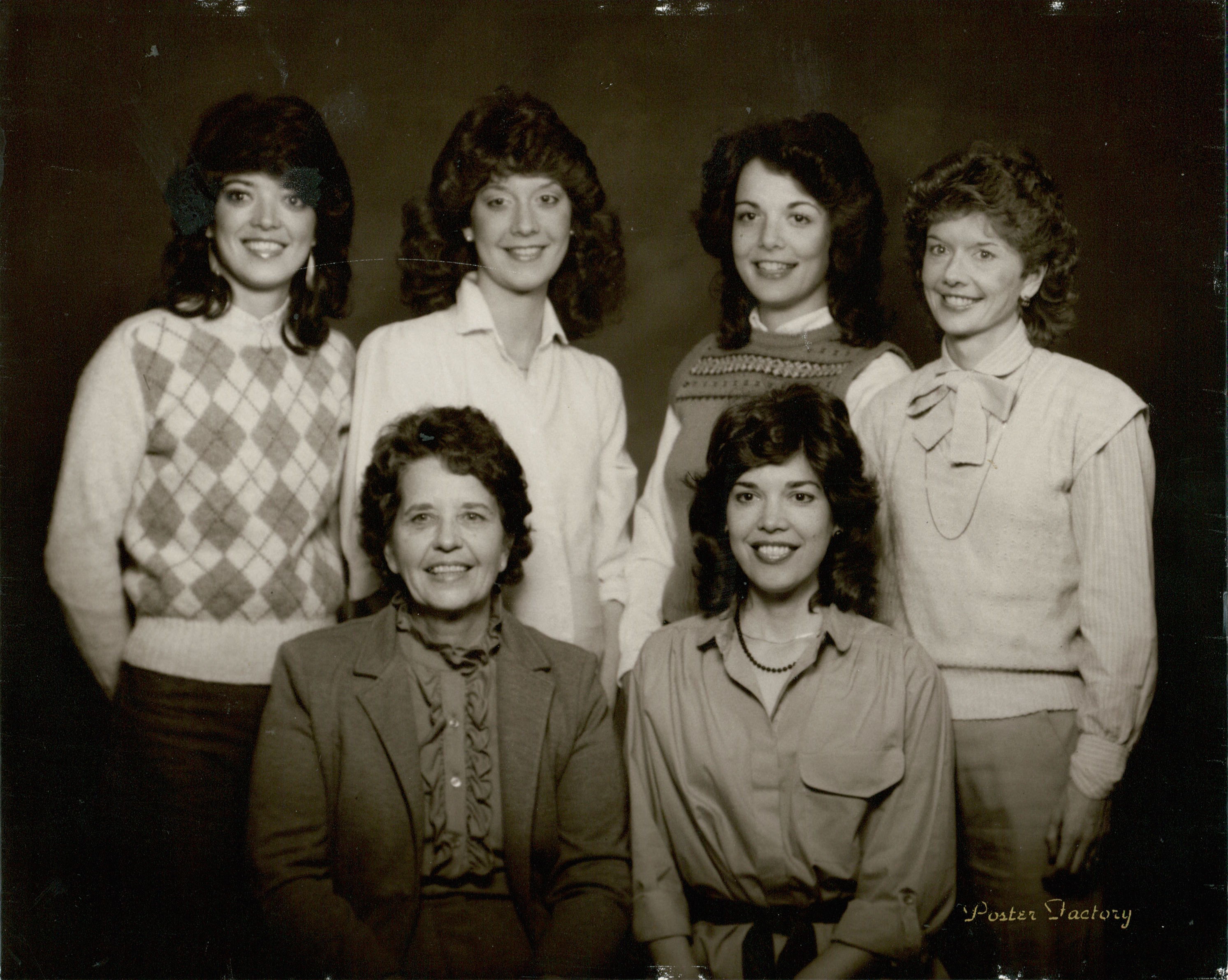 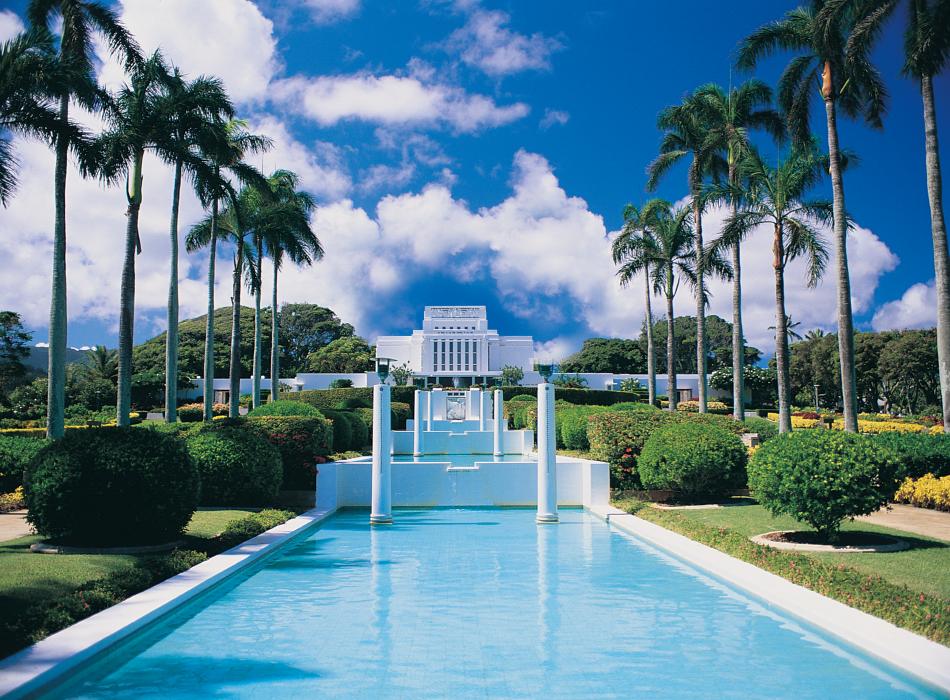 I still love to sew and try to make something for my smaller grandchildren at Christmas time but as they grow older it hard to find things to sew for them.  Before ou mission to Hawaii, I would find a toy that I could copy and make whatever I could.  Even our older granddaughters seem to like stuffed toys.

While we were in Hawaii we purchased a cheap machine so I could have it for mending and for the other missionaries to sew or to mend on.  It was valuable to all of us.

I did make monkeys the first year we were there for the sister missionaries for Christmas.

I can be under alot of stress and if I can sew a little project it seems to relive some of the stress I am experiencing.

My MemoriesMom’s memories of childhood